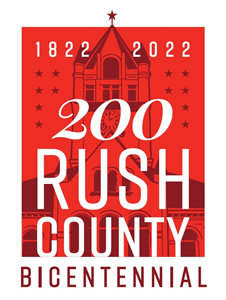 Please visit our sponsors below and let  them know how much you appreciate their support for the ride!

Where do the proceeds from the “Five in 50” go?

Money raised by the “Five in 50” will be split between the preservation of Rush County’s Covered Bridges, other historic sites, and organizations supported by The Rush County United Fund (RCUF).

Which distance should I choose?

Riding the full 50 miles takes training. If you haven’t trained appropriately, consider the 12 or 24-mile routes.

How long does the ride take?

The full 50 miles takes between 2.5 hours for elite riders to 5.5 hours for the slowest riders.

What happens if it is raining?

The ride will be held rain or shine. Rush County Emergency Management will make the call if the ride cannot be held because of weather (lightning, high winds, etc.).

Unfortunately, if the ride is canceled, we will not be offering refunds.

Will there be food, water, restrooms on the course?

The Five in 50 has seven SAG (Supply & Gear) Stops that have water, food, bathroom facilities and limited tools and bicycle pumps.

In case of an emergency, an emergency contact number will be provided at the beginning of the ride.

A trailing vehicle will ensure that everyone gets back safely.

A CPSC or SNELL-approved helmet is required to be worn by all riders whenever their bike is in motion.

Minors may participate but must be accompanied by an adult.   Helmets are required.

Will I have to wear a mask?

At this point, wearing a mask is purely optional.

What COVID prevention protocols are in place?

The organizers of the Five in 50 are committed to having a safe and enjoyable bike ride.

An advantage of the Five in 50 is that primarily outdoors with everyone at a comfortable social distance.

While vaccinations have dropped the COVID infection rate nationwide, we recognize that we aren’t out of the woods yet. We will remain in contact with local health officials to ensure we have taken all appropriate measures.

We encourage all riders and volunteers to be vaccinated if they are eligible.

The event is designed as a tourism opportunity to promote local businesses while encouraging active living and physical fitness in Rush County. The ride will showcase the beauty of Rush County and its historic covered bridges.

Because Proceeds from the ride will be directed to the Rush County United Fund https://www.rcuf.org and for the preservation of the Rush County Covered Bridges and other historical sites.

Because we’re thrilled to be a “tune up ride” for the Hilly Hundred!

AND because… Free ice cream!  The Broad Ripple Ice Cream Station will be here again!

The “FIVE in 50” is the brainchild of David Willkie, as a way to honor his late mother, Virginia, who was an avid Rush County bicyclist. The grandson of Wendell Willkie, David is the principal of Willkie Ventures, a specialty finance company based in Rushville. He is a former staff member for former U.S. Senator Richard G. Lugar. David is an endurance athlete and bicyclist

Roads will be marked and restroom facilities will be available, but SAG stops will not be fully staffed until after the parade start at 10am.

Registration opens at 6:30am

Following the ride, participants and guests are invited to attend the FREE “Live at the Levee” concert at the Rushville Riverside Park Amphitheater featuring Eddie Montomery of  Montgomery Gentry & Molly Hatchet

Community members are invited to cheer on riders throughout the course, and riders will have the opportunity to vote on the town that demonstrated the best of Rush County hospitality after the ride.

Please show them some 💖